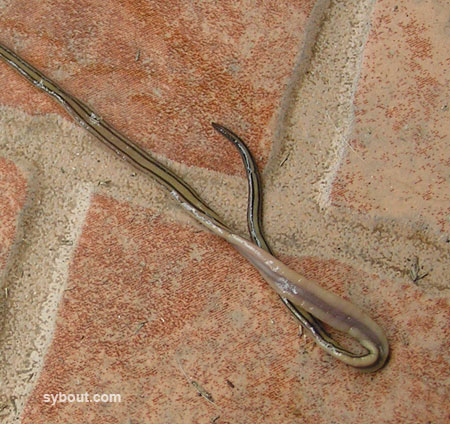 Sometimes you find animals in your garden that you have never seen before. This happened to me during a very wet period of the rainy season. A strange rather flat worm crept over the tiles of the terrace. I have never seen this animal before and have not seen it ever since. I have no idea where the worm normally lives or what it eats. For a moment I thought that it might have appeared from one of our cats' intestines, but after noticing the worm's flat under parts concluded that it probably is a flatworm living on land.

Can somebody please help with the identification of the creature?

Here the text ended for some years, until I received an e-mail in from a reader called Obediyah, who was friendly enough to pass on the name.

This so-called "land planarian" is a predator and eats earth worms, slugs, snails, insect larvae, and can be cannibalistic.

Some confusion came up when I found in several sources that Bipalium kewense has five longitudinal dark brown stripes on its body. As you can see in the photos, the flatworm I found has four stripes.
Wrong identification?

I am aware that some earth worm are missing here. I have seen enough of them when digging in the garden, but for some reason never got my camera to make a picture. Some earth worm photos should follow soon.