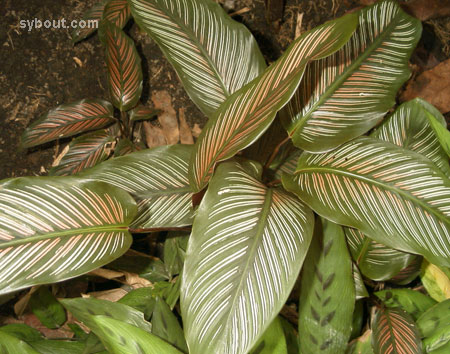 Calathea ornata - young leaves in which the white lines are partly reddish.
Below in picture: Stachyphrynium repens.

Calathea ornata grows well both in pots and open ground. In gardens with enough space they show well in big groups as a ground cover.

As you can see in the two pictures above, Calathea ornata can show some variety in leaf color. Slightly reddish striped leaves like in the picture on the right show up when older plants are cut back, or make new shoots from their roots. A place in full shade might be an other stimulating factor. The leaves in the picture on the left have a length of 40 - 55 cm. The leaf surface is smooth and slightly shiny. The back side of the leaves have a purplish colour. Leaves have a spread position in the daytime and stand upright in the late afternoon and night. Older plants develop very long leaf stalks that can make them reach a height up to 2 meters. In my garden the plants do no grow higher than 1.2 meters. 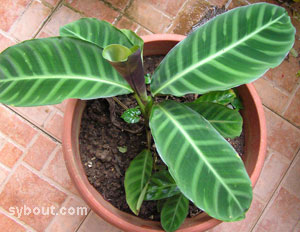 The surface of the leaves of Calathea zebrina look like velvet, but are actually smooth. The bigger leaves in the picture have a length of about 35 cm and are about 16 cm wide. The back side of the leaves are purple-red. The plants reach a height of about 50 - 70 cm. Calathea zebrina likes a humid place in the shade. It is usually planted in pots, but can as well be planted in groups in a well drained garden bed. 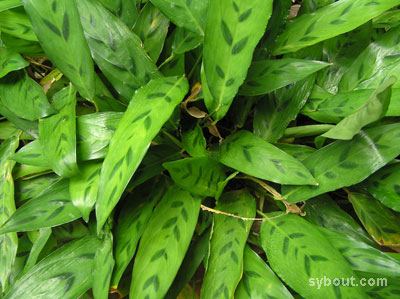 Stachyphrynium repens does well in pots, but is as well very suitable as ground cover in partial or full shade. Its leaves are about 15 - 25 cm in length. Plants make continuously new shoots and form clusters that are extending in time . Propagation is easily done by dividing clumps. Though I never discovered flowers or seeds, sometimes small new plants show up in other parts of my garden. These places are always humid and shady. I still have to find out how the dispersal of this plant works. Calathea picturata is originally from Venezuela. This Calathea species remains low and has leaves of about 8 - 12 cm length.  The leaves of Calathea picturata 'Vandenheckei' are decorated with a broad silver-white line form the base to the top and a narrower zigzag line close to the leaf edge. The back of the leaves have a kind of wine-red colour. 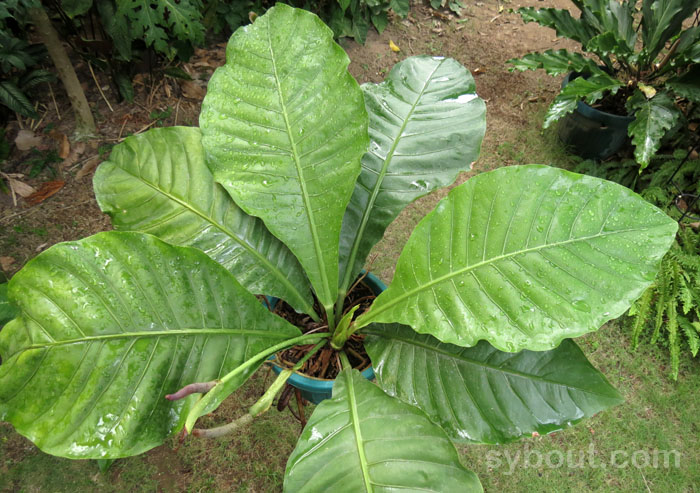 Some Bird's Nest Anthurium plants ended up in my garden after some relatives moved and just left them in their yard for whoever liked to take them. In the period 2007 - 2009 this was unthinkable to happen in Indonesia, because at that time large Bird's Nest Anthuriums were sold for hundreds (some species even for thousands) of dollars. This craziness clearly is over now.

The plant in the picture has large leaves of about 0.35m x 0.65m. The inflorescence is still young, but I guess that the berries developing later will be red. I still have to find out its scientific name. A search only learned me that there are many species that look similar.

Like most Anthurium species this plant doesn't like full sun, but some sun in the early morning or late afternoon isn't a problem. The soil should be humid and well drained. 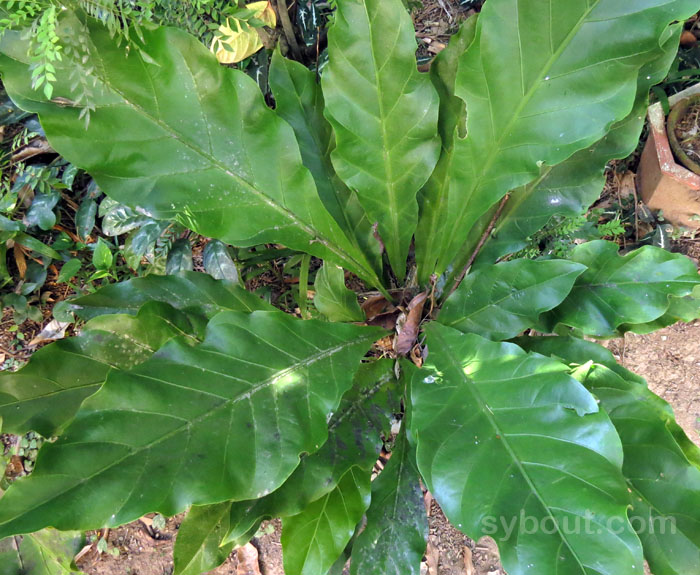 Wave of Love seen from straight above 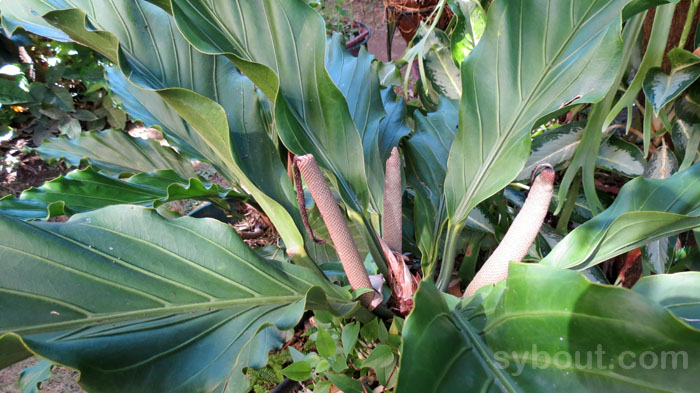 Wave of Love with young inflorescence Mature berries of Wave of Love

The Wave of Love origins from Brazil, Paraguay, Peru, and Bolivia

Like the Bird's Nest Anthurium species shown above here, the Wave of Love was popular (and expensive) in Indonesia in the period 2007 - 2009. Since then prices have gone down to normal and many people found out that Wave of Love is easy to propagate from the seeds it produces. As you can see from the pictures, young plants may show up in the pot when berries and up there. These seedlings will easily become strong independent plants when transplanted to smaller pots with a good draining soil mixture that remains humid.

The leaves of the plants in the pictures are about 0.15m x 0,65m. The leaves can grow far bigger than that, so make sure that you have enough room for the plant. Sansevieria Hahnii seen from straight above Sansevieria 'Hahnii' is a short-leaved Sansevieria variety. It has a yellow and green colored variation called Sansevieria 'Golden Hahnii'. This species likes a sunny place and should not be given to much water, as it might develop leaf rot.

Propagation is easy by taking off shoots from the mother plant or by leaf cuttings. Strange enough leaf cuttings of the yellow variety develop into the grey-green type of the plant. I guess propagation of Sansevieria 'Golden Hahnii' should be done by planting shoots. In the old "Exotica - pictorial cyclopedia of exotic plants" of Dr. Alfred B. Graf I found some pictures of Alocasia's very similar with the plant in my garden. First I thought to show this plant under the name Alocasia longiloba, but found some better resembling pictures in the book (and as well in the internet) with the name Alocasia x amazonica. This species is said to be hybrid of Alocasia watsoniana x Alocasia sanderiana.

The determination of Alocasia's seem often to give problems as one single species can grow a variety of leaf shapes. Whatever the correct name of the plant in the picture, its leaves are very decorative. The length of the bigger leaves is about 60 cm. The plant likes a humid shaded place, but can stand some sun.