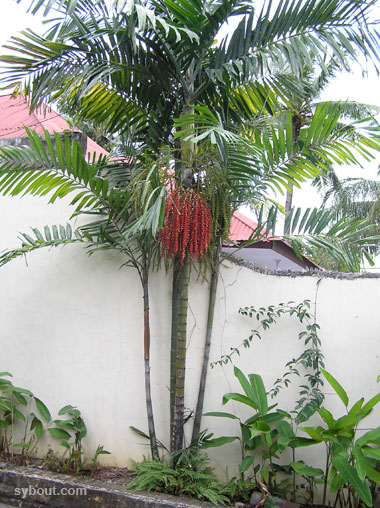 Macarthur Palm with some young stems This native of Papua New Guinea and Australia is easy to grow and popular in most parts of Indonesia. Its limited size makes this palm as well suitable for small gardens. It grows well both in sunny and shady places. It usually forms small clumps as young stems appear from the base of the parent stem. Stems grow up to about 5 - 8 meters high. The younger parts of the stem are smooth and dark green with decorative ring-shaped leaf scars. Older parts of the stem turn grayish green and do not show the leaf scars that strikingly.

Inconspicuous tiny white flowers appear all year round on inflorescences below the leaves and turn into sprays of small red fruits. Leaves are pinnate with leaflets that have typical torn-off looking tips. The dark green leaves and bright red mature fruits form a very attractive combination.

Strange enough one of the Macarthur Palms in my garden has even after eight years not made a single new shoot, though all the others produced clusters with at least five new stems over the same period. Falling seeds seem to germinate easily (but only in humid places), as the ground under one of the trees is covered with hundreds of young seedlings. The fruits of the Macarthur Palm are very much loved by birds like Bulbuls, Mynas and White-eyes. 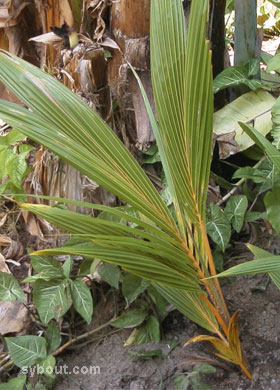 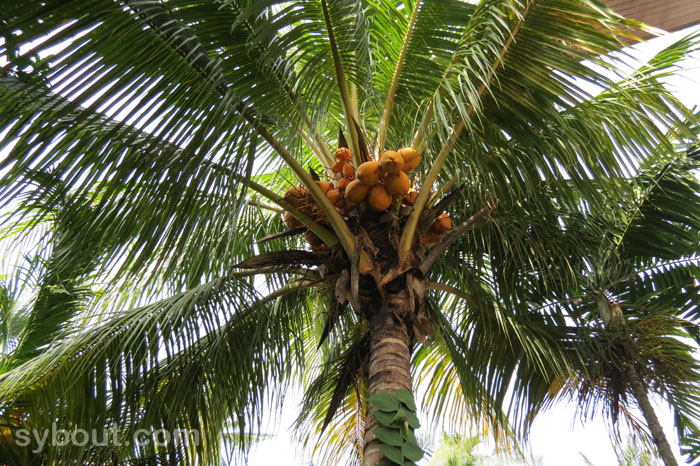 Unfortunately Coconut Palms are only suitable for large gardens. If given enough space this most commonly known palm will add long-time attractive decoration, as its life time can easily be fifty years and more. Wild trees can reach a height of 30 meter. Coconut Palms need full sun, but can grow in a wide range of soil types. Some special attention should be paid to the place where its fruits might fall, as these can cause severe damage to both material and living beings.

In my garden I had a dwarf-variety Coconut Palm that is said to produce fruits when the stem is only one meter tall. The first fruits appeared a bit later then expected: this was when the stem was about 3 meters high. Even this small growing variety has leaves that took too much space in my relatively small garden. Early cutting of leaves was necessary, as older leaves turn to a horizontal position and stand out too far. After enjoying for several years the beautiful tree and its coconuts (nice to drink when still young), the tree reached a hight of about 7 meters and its leaves reached the roof. Because I was afraid that the leaves would sweep off the roof tiles during strong winds, I decided to cut the tree. 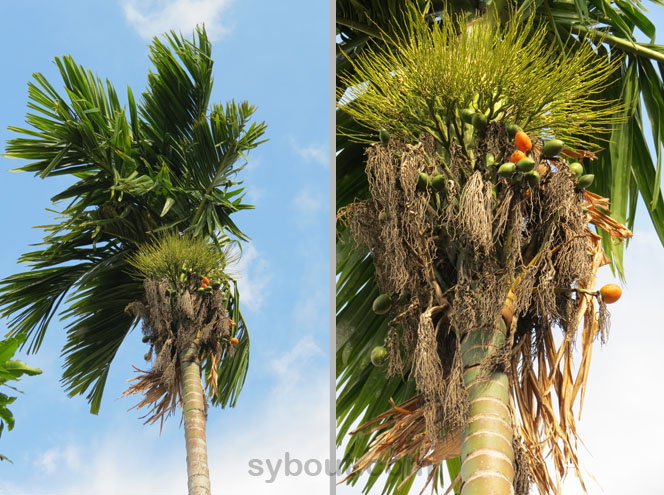 One of the characteristics of the Betel Nut Palm is its tall and slender trunk with clear leaf scars. Its crown exists of dark green pinnate leaves with sharp topped leaflets. The Betel Nut Palm grows fast and does not need much space and therefore is suitable as a solitary tree in small gardens. It can grow up to 20 meters in height.

Older trees develop large bright red-orange fruits just below their crown. The fruits were in the past widely used because its light narcotic effect. Though betel nut chewing is nowadays less popular, the trees are still commonly grows because of their ornamental qualities. 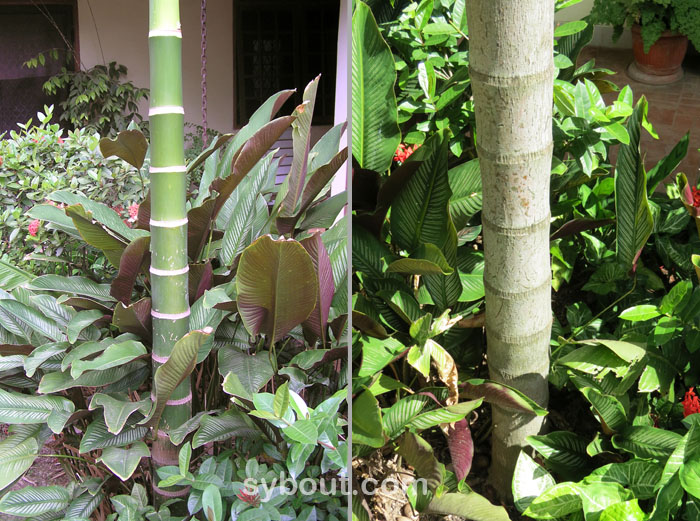 The Betel Nut Palm in my garden first started to produce flowers and seeds after 5 - 6 years. When the tree was still young its stem was green with decorative leaf scars. Later the lower part of the stem turned grayish-green. 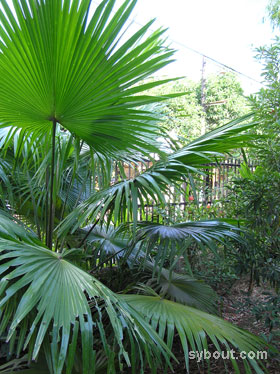 Livistona rotundifolia is a very decorative palm that likes full sun, but can grow as well in partial shade. Young plants can be grown in big pots. Older trees have leaves that easily reach 1.5 meter in diameter and finally will grow a stem up to ten meters in height. The leaves are fan-shaped with leaflets on the edge. Mature Livistona rotundifolia produce large bright round red seeds appearing just below the crown. In my garden a part of the seeds that fell under the tree develop into new plants. 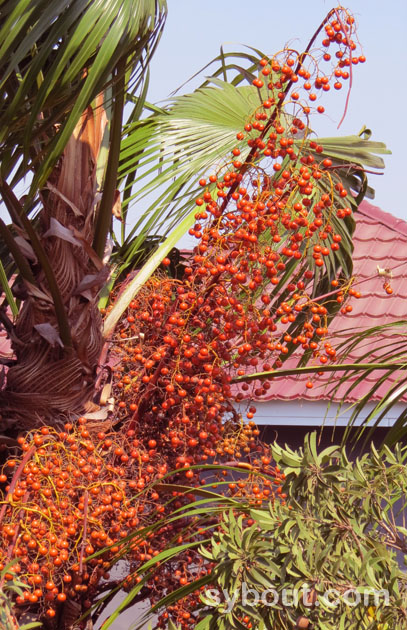 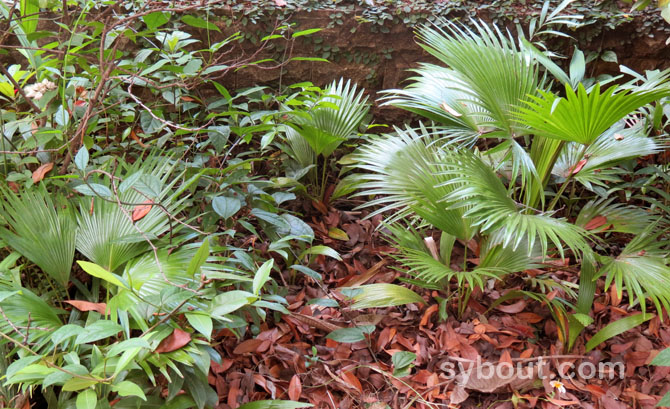 
The "mother" Fan Palm in my garden was initially grown in a pot. After a few years it became too big and was moved to the open ground where it grew vigorously. After a few years it formed a clear trunk with parts of cut leaves still attached. Some of the leaves in the first picture are 1.80 meter wide. Sometimes the plant is infested by caterpillars, but never to such extend that complete leaves are eaten. The mother tree in my garden is now about 8 - 9 meter high. 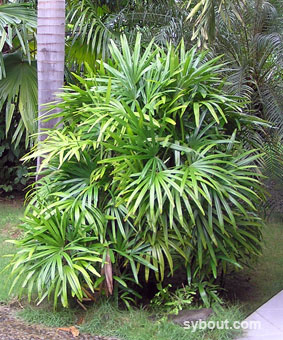 The Lady Palm is an easy growing palm, that can stand both partly sun and full shade. In case it receives too much sun, its leaves tend to turn yellowish. Its origins are South China.
This palm species has about 15 - 50 cm size palmately compound shiny green leaves and becomes about 2 meters high. After reaching this height the palm stops growing in length, but will produce numerous new shoots around the mother plant forming an ever extending cluster. Because of it is strong and satisfied with little light, it is suitable for indoor use. When light is too limited it might still survive, but will produce less dense and healthy looking stems and leaves.
Propagation is easiest by division of clumps.