Latin: Argiope (mangal?)
Indonesian: I cannot find an Indonesian name, but translated from English it would be: Laba-laba Salib Santo Andreas St. Andrew's Cross Spider seen on its back. Note the silk zigzag stripes in the web. 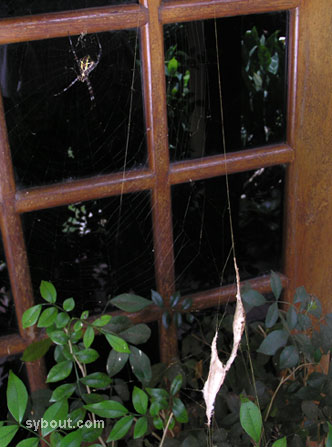 St. Andrew's Cross Spider with big catch!
So far I discovered one species of orb web building spider in my garden: the St. Andrew's Cross Spider. It got its name because of the position of its legs when it sits in the centre of the web.
Usually I can find five or more inhabited webs of this species, but during certain months there is not a single one. Webs are located up to three meters above the ground.
The St. Andrew's Cross Spider is relatively easy to photograph as it is not shy and does not move when the camera lens comes nearby. Its web has often two or four characteristic zigzag lines near the centre called "web decorations" or "stabilimenta". There are three explanations for this phenomenon, that might be all true:
- They stabilise the web (hence the name "stabilimenta")
- They make the web better visible for passing animals like birds. This reduces the risk of damage, like white paint does on windows of houses under construction.
- They give the impression of flowers to insects. Research has shown that the silk used for the zigzag lines reflect ultra-violet. Many flowers have different UV light reflecting and absorbing zones to guide insects to the pollen and nectar.

After the female spider has mated with the far smaller male spider it will lay its eggs in a egg sac made of silk. This egg sac is usually long stretched and attached near the edge of the web. A St. Andrew's Cross Spider that I could observe easily, because it made its web next the door of my house, had finally four of these sacs in its web: two in the top and two down at one of the main threads. The eggs sacs were made with at least a week interval. The young hatch after about five days and leave the mother's web in small groups sitting on long very thin and light threads that are easily carried away by the wind.  Sometimes these threads make a bridge between the mother's web and an other place.

The spiders always hang with their head down in the web. At the moment the web is hit by an unlucky insect the spider quickly ties it with a few threads and wraps it into a part of the web. After this the spider sucks the fluids out of the victim and will finally drop it.

The photo below here shows the front of a St. Andrew's Cross Spider hanging head-down in its web. I still have to learn the different parts of the spider body, but guess that at the top (the 'bottom' of the spider) is the part that releases the silk surrounded by the 'spinnerets'. Somewhere in centre of the abdomen should be the opening to the reproductive organ.
Sitting (or hanging) in its web this spider holds its legs in pairs of two. The two other leg-like body parts at the bottom of the picture are the pedipalps, that function as an organ of touch. Behind the pedipalps are the fangs that inject the venom in the trapped prey.
Web spiders do not have a good vision. With the hair on its legs the spider can feel vibrations. This warns the animal for approaching predators. 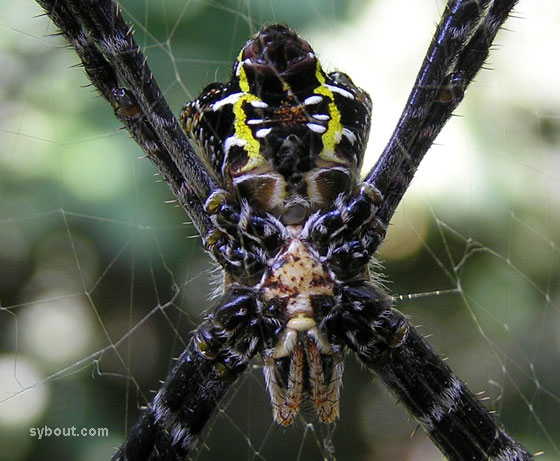 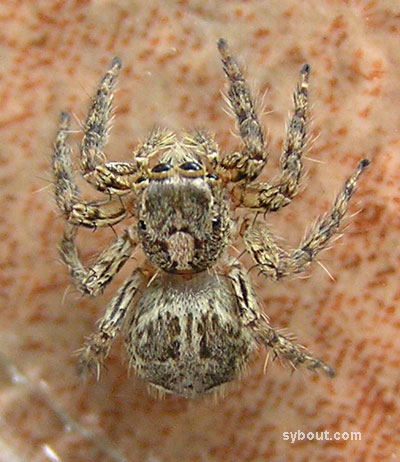 The tiny spider in the image above here I found on a wall in the (rather dark) bathroom. It does not make a web to catch its prey, but just jumps on it. Different from web spiders this type of spiders has a good vision needed to locate the prey. The macro photos I could make after catching it and placing it in a glass jar (somehow the spider's legs are less suitable for climbing glass). In the photos I can only discover six eyes. Four eyes are placed in the front row. The central two of these are very big. Two other eyes are placed more to the back of the cephalothorax (head combined with thorax). Based on the position of the eyes, the length of the legs and the way it moves I think it is safe to say this is a Jumping Spider. Before it jumps down or over an open space it attaches first a thread to the place it starts. In case it misses its target the thread will prevent the spider to fall far down.
After photographing I released the spider again in the bathroom. Though it had "seen the light" it just stayed there. Probably it preferred the place because there usually is enough food (mosquitoes?) to find.

Size: body (without legs) about 8 mm 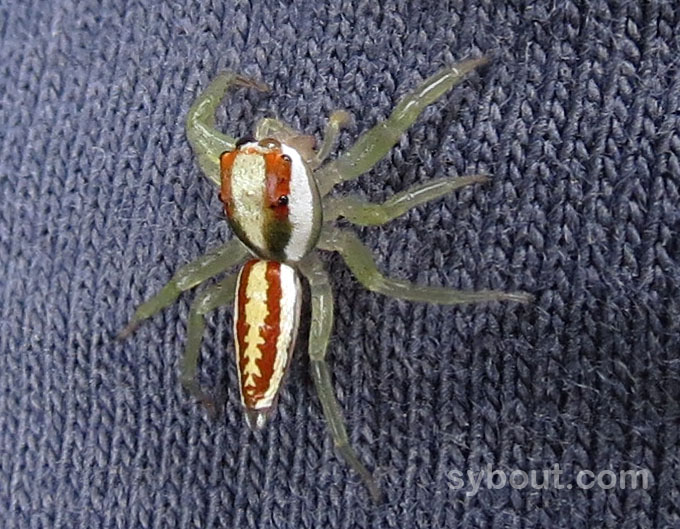 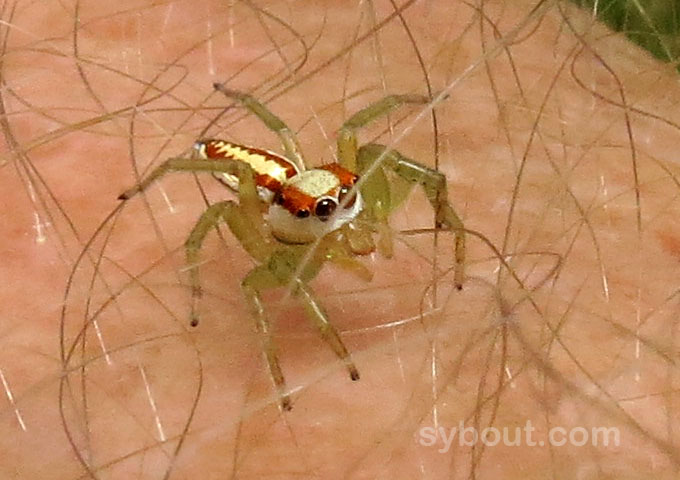 Look who is sitting on my knee!
It always takes a while to realise that a little spider is moving around on my chair and body. Often my first thought is that a fly is bothering me and I try to chase the animal away. It is worthwhile though to have a close look before taking action. Many of these small creatures are beautiful and look funny.
This orange-white jumping spider has only little hair and has glassy transparent legs. Unfortunately the photo I made of the spider shown above here does not show the position of the eyes clear enough. Because of that it is hard to find out to which group this spider belongs. Is it an other Jumping Spider, or may be a Wolf Spider?
Strange enough this spider has some spots on its abdomen that look like eyes. Could these be false eyes?
The main characteristic used for identifying the group of Wolf Spiders is the row of four small eyes with two big eyes above it. Two smaller eyes are placed behind the two big eyes.
Wolf spiders are said to hunt most of the time on the ground. I found this spider on a wall in the garden. So, not a wolf spider? Probably it is as well not a jumping spider, as its 'face' is not flat to give place for the two big eyes like can be seen in the picture of the jumping spider ("Jumping Spider (1)) above.

I hope to meet this white hairy fellow again and take a closer look. 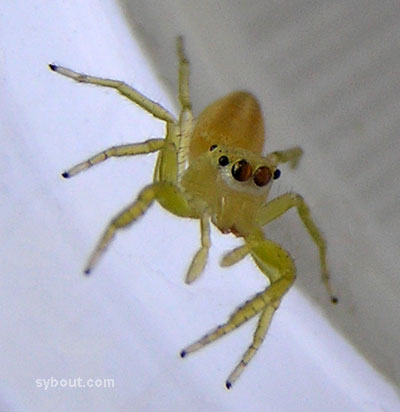 This little fellow I found one day on my arm when I was sitting in the back yard. Unfortunately this picture was the only shot I could make of it, as it soon escaped. This kind of spider is fast and is moving continuously. It looked more yellowish to me when I first saw it. In the picture its legs look transparent; are they really? I will have to wait for an other meeting with this animal to find out more details.
Like the "Jumping Spider (1)" shown above it has two characteristic large eyes in front with smaller eyes next to it and some small eyes more to the back of the head (actually cephalothorax). Probably it is more hairy than the picture shows. 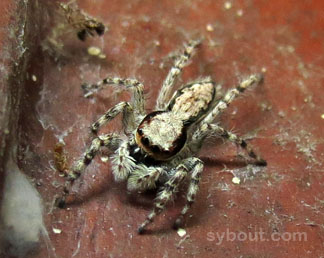 This little spider sitting on a dirty door made it difficult to make a good close up picture of it. Like many other jumping spiders it kept moving and hiding. Hopefully it soon will give me a better chance to make a good portrait.
This woolly spider has a yellowish-brow face and black sides of its abdomen. There are dark bands on its legs. 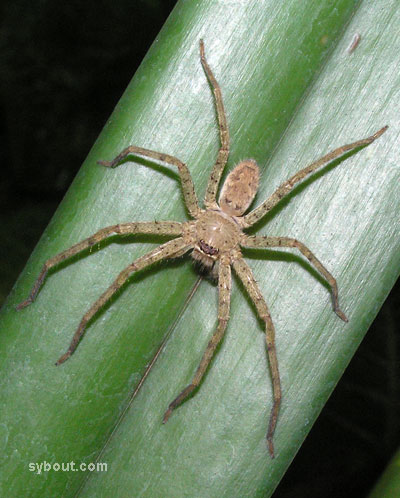 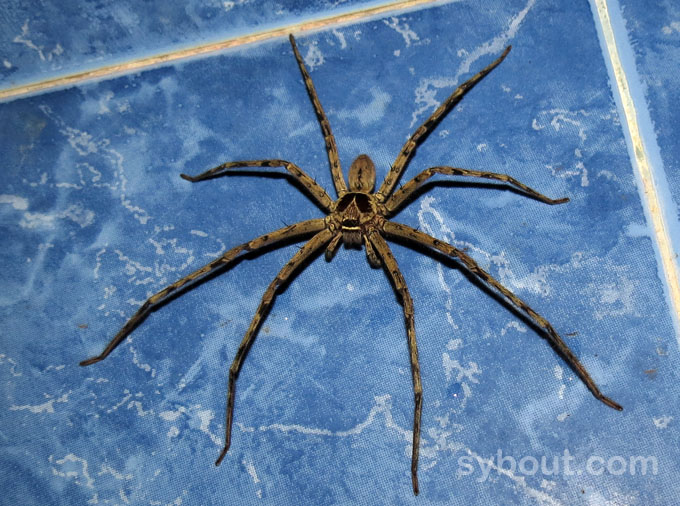 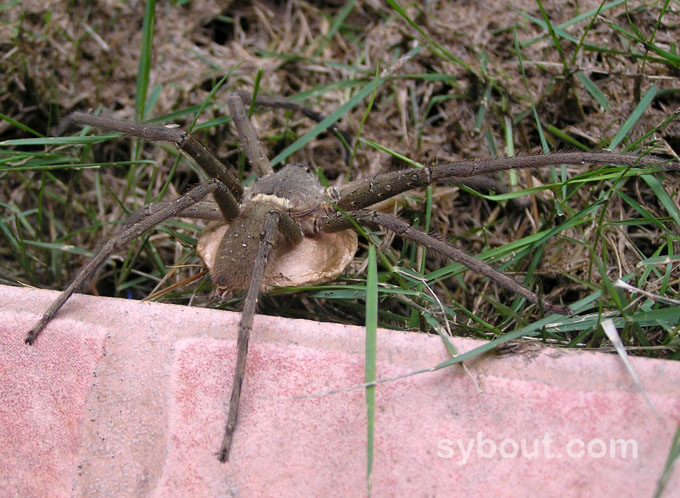 Domestic Huntsman Spider (seen from its back) carrying egg sac 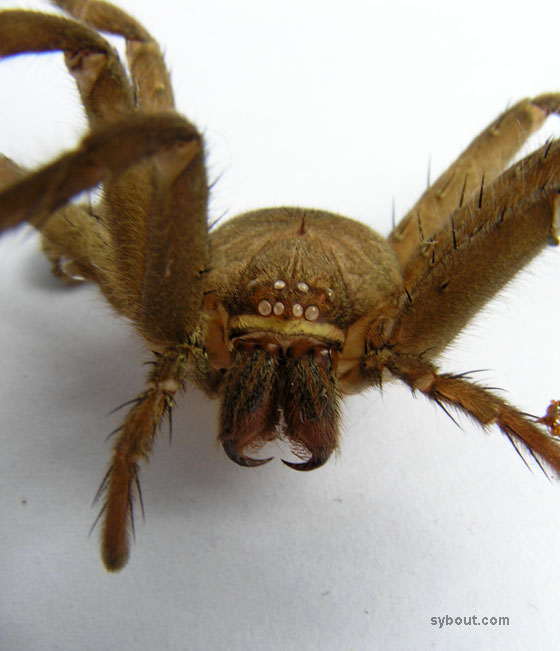 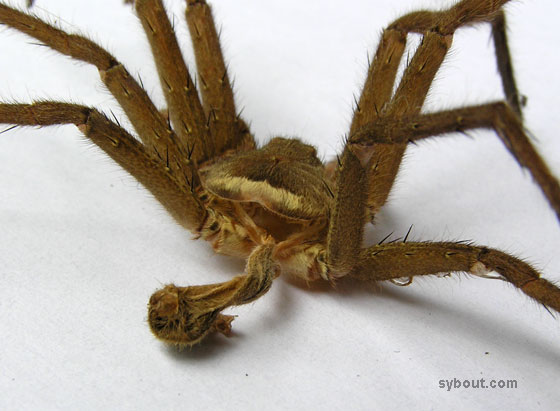 In many houses in the tropics you will find Huntsman Spiders. It was not a surprise to find some in my house. Though these animals are not aggressive they have often scared guests visiting the bathroom: they can grow big! They seem to move freely between the rooms with open windows and the garden. The spiders walk more or less sideways.

The males can be recognised by a pair of dark brown patches on the "carapace" - dorsal (upper) section of the exoskeleton. Further males have longer legs than females.

I am not really sure what all is on these spider's diet. One thing I have noticed is that they go for cockroaches. And that's good!

The spiders lay their eggs in an egg sac carried under the body. I haven't seen yet what size the young spiders are when they appear from the eggs and how long they stay after that in the sac.

The last two photos above here show the old 'skin' of a Huntsman Spider. In fact this is an external skeleton (exoskeleton), which gives support and protection to the body contents. The exoskeleton does not grow with the spider. The spider leaves it after it no longer fits. The spider has developed a new skeleton inside before that is going to happen.
It is interesting to see that all external parts, including hair, fangs and the outer layer of the eyes are shed. The eyes are clearly placed in two rows of four. The eyes at the outside of the rows are slightly bigger.