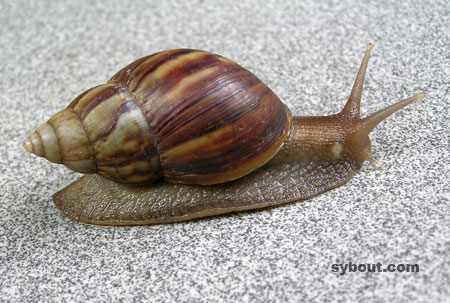 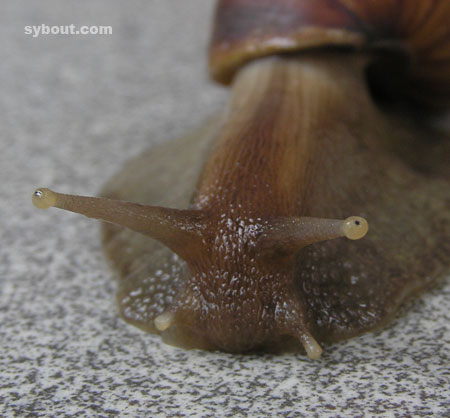 Giant African Land Snail - close-up of tentacles with the eyes

Size:
the shells of the snails living in my garden are not much longer than 7 - 8 cm, but in literature recordings are found of 20 cm in length and 12 cm in diameter.

Though this animal is kept as pet in some countries and is a delicacy in others, it is not very popular around our house. It easily becomes a pest that destroys several plant species.

The Giant African Land Snail is not native to Indonesia, but has its origin in East Africa (Kenya and Tanzania). Next to many humid tropical countries in Africa and Asia the snail has been introduced to the islands of the Pacific and Indian Ocean and the West Indies.

It is easy to understand that the species can become a serious pest in an environment without a suitable natural enemy. The lifespan of the Giant African Land Snail is 5 - 7 years and reaches its adult stage after about six months. A single snail can lay about 1000 eggs during its lifetime. Eggs are said to hatch in anything from a few hours to 17 days.

Short after the dry season starts the animals disappear. It seems they move underground and seal off their shell. During the rainy season they appear again.
The moment I write this (September 2010) there is an exceptional situation: because of the unusual humid dry season there the Giants African Land Snails are still active in my garden. As usual you will find them more during the night than in the daytime. 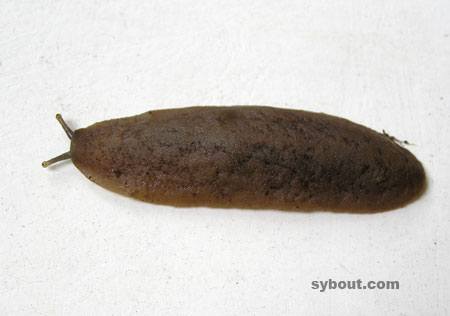 For a long time I had no idea what kind of slug sometimes moves around on the pavement in my garden (see photo on the right). The animal was identified by a reader (N. S. Wong, who was friendly enough to write me) as Kaevicaulis alte, the Tropical leatherleaf. Like the Giant African Land Snail it disappears in the dry season and shows up again in the next rainy season. It is a rather shapeless flat creature with a rough skin and is only easy to recognize as animal for its tentacles.