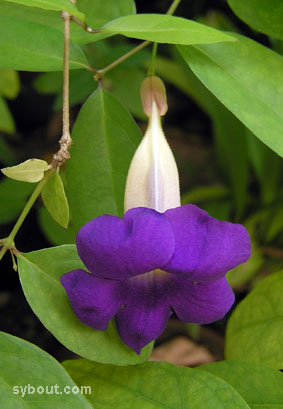 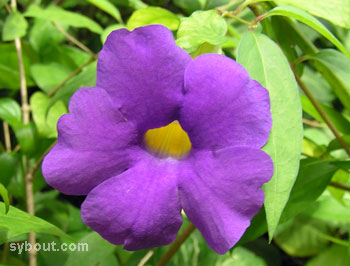 Sometimes I hear myself saying "Shit wat mooi!" (Dutch for "how beautiful!") when I see the colours of the flower shown in the pictures above here again.

As its botanical name says, Thunbergia erecta has "upright" branches and is not a climber like many other well known Thunbergia species (e.g. Thunbergia grandiflora shown under "Vines & Creepers".

The branches of the King's Mantle are not very strong though, and bend down when growing longer. Pruning can help to create a more sturdy bush. If you are afraid to disturb flowering is might be better to provide some support. Without support the plant will grow up to about one meter height. Leaf size is about 4 - 7 cm but can reach 10 cm at vigorous young shoots.

In my garden I grow some plants in pots. They are placed in a spot where they receive full sun only a part of the day and seem to feel well there. 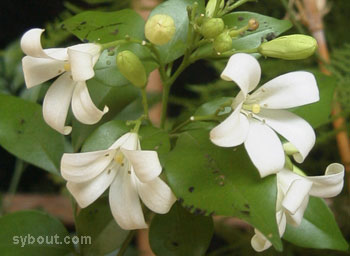 The Orange Jasmin is a member of the orange family and a close relative of the Curry Leaf (Murraya koenegii). Its area of origin is China, Southeast Asia and the Malay Peninsula.

The species is attractive because of the shiny dark green leaves and the strongly scented small white flowers. The flowers are followed by about 1 cm long orange to red coloured fruits. Flowers appear all year round with a peak in the rainy season. The leaves exist of 3-7 oddly pinnate leaflets.

The plants can grow as tall as four meters high if planted in open soil. Orange Jasmin prefers full sun, but will do well in a light place in the shade too. It grows well in most soil types. The species stands pruning well, and therefore is often used for hedges. Flowering will be reduced if trimmed often.

Propagation is from seeds and cuttings.

In my garden I grow a Orange Jasmin in a pot. It has had the same size for years because of regular pruning. Flowering is never abundant, but a few flowers is enough to spread the pleasant fragrance. 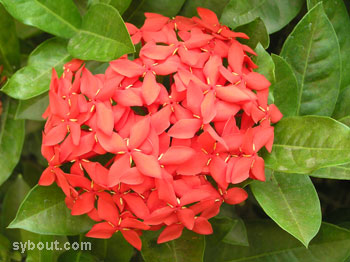 The Jungle Flame is an easy to grow plant that can reach several meters height. In Indonesia it belongs together with Hibiscus to the most popular flowering shrubs. It produces all year round large clusters of small red flowers. The species is strong and stands dry spells well, though its inflorescences will become smaller if soil moisture falls low. Only a very small part of the flowers will develop in a berry-like fruit.

The plants stand pruning well, and will develop a dense crown if pruned regularly.
Propagation is easiest done by layering. Sometimes new shoots appear from the mother plant's root system. These can easily be separated and uprooted for propagation. 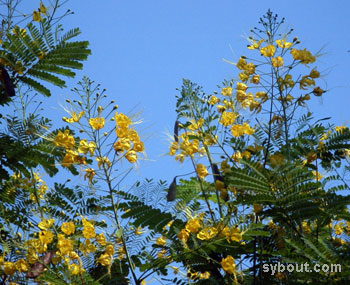 Two photos showing that thorns do not 'branch' from the stem,
but are part of the bark of the tree. So, in botany they probably
are not called thorns, but prickles. 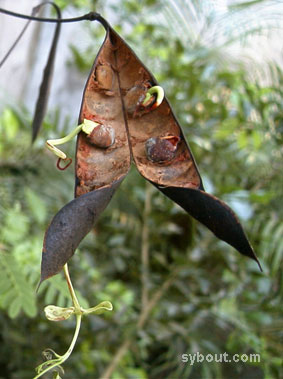 The Peacock Flower is a fast growing legume with beautiful compound leaves. Its inflorescence are attractive as well and vary in color from yellow, orange to reddish purple. The plants have bristle branches with thorns. The shape of older shrubs unfortunately is less attractive. Pruning does not help much to get a better shape as the plant will develop many long straight new shoots.

Flowers turn into pods that snap open if the seeds have ripened and the pods are dry. Seeds can be shot several meter away. During extreme humid periods in the rainy season this way of seed spreading dissemination is disturbed, because the seeds germinate in the pods that do not dry well (see photo above here).

Propagation of the Peacock Flower is done from seed. 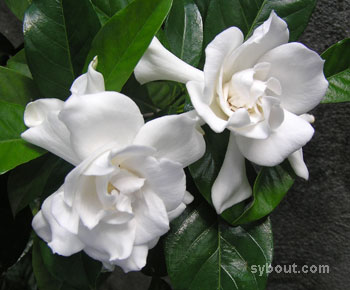 Gardenia jasminoides is a native of South China. There this species had been cultivated for at least thousand years already when Westerners learned to know the plant. This medium sized small shrub is popular for its shiny leaves and large pure white fragrant flowers. The flowers turn creamy white after a few days, but keep their fragrance.

In the twenties of last century Gardenia among others was used by men as a fragrant decoration in a button-hole of the jacket.

Propagation is from woody cuttings or by air-layering (marcotting).

Difficulties that I experience: often flower buds drop before opening (eaten by insects?). 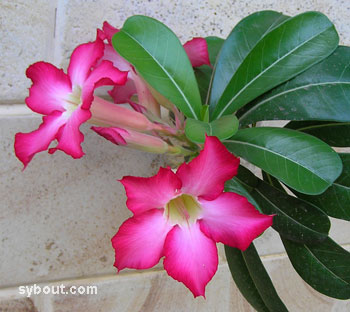 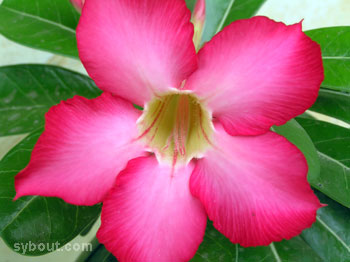 The Indonesian name could make you think that this plant if from Cambodia or Japan. Both are wrong. The Desert Rose is native to eastern and southern tropical Africa, as well as the Arabian peninsula.

This succulent plant that is a member of the oleander family can reach a height of about one and a half meter. The stem is often swollen at the base and sometimes twisted. It has attractive dark green shiny leaves and bright coloured flowers. The flowers are trumped shaped and appear all year round.

Desert Rose needs sunny place in a well drained soil that is frequently dry. A soil that is wet for long periods can cause rotting of the stem. The species grows very well in pots. Clay pots are preferred above plastic pots. Not all flowers develop seed pods. The surprisingly long pods open when mature and expose the seeds that lay in a cotton-like material. Propagation is by means of seed or cuttings. Seeds germinate easily in a mixture of sand and soil. Cuttings can best be dried a few days before planting. Like many succulents all parts of the Desert Rose are poisonous. The Angel's Trumpet is a shrub that can reach a hight of about four meters. Its area of origin is thought to be The mountains of Peru and Chili. Its pure white trumpet shaped hanging flowers are about 30 cm in length and have typical upwards bound tips. The flowers spread is nice fragrance during the evening and the night.

The shape of the shrub easily becomes less attractive in time, but with some pruning this can be improved. 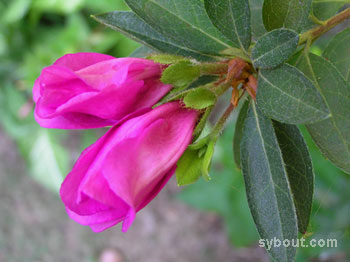 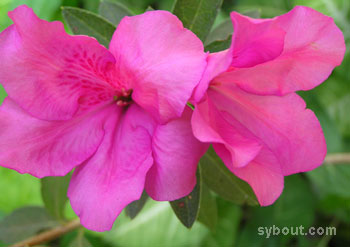 According to some sources Rhododendron x pulcherima is a horticultural hybrid derived from R. ledifolium, of Hooker, impregnated by the pollen of the Old Red R. indicum. It is a woody shrub that can grow up to about 1.5 meter high. Its leaves are 3 - 4 cm long, somewhat grayish green and have a rough surface. In the tropics the species seems to be more suitable for mountain areas than areas at sea level. It flowers several times a year. The flowers measure about 8 cm across and exist of five purple to rose coloured petals with five small green hairy sepals. Usually there are two or three flowers together with a rosette of leaves at the base. White and pink flowering variety as well exist.

The plant prefers a humid, humus-ridge and lime-free soil.

The plant growing in my garden gets full sun four a part of the day. During the dry season it produces very few flowers. As soon rain starts the plant starts blooming. 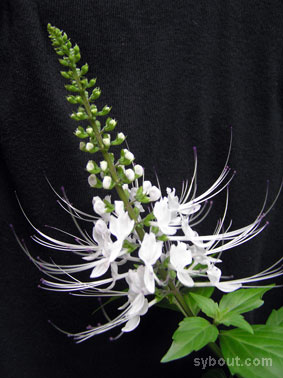 It produces long sprays of white or pale mauve flowers with extremely long stamens that are the reason for its English and Indonesian name. Flowers appear all year round. The branches of Cat's Whiskers are quadrangular. Its leaves are smooth lanceolate shaped with toothed margins.

The plants like full sunlight or a partly shaded place with well drained soil.
The shape of the shrubs can become messy as its branches tend to grow very long and bend to the ground. This can be prevented by pruning after flowering.
Propagation is by means of cuttings. 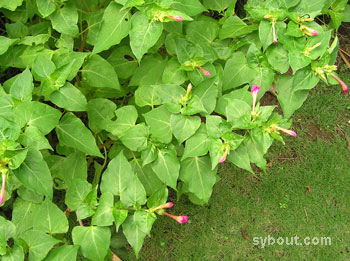 The English and Indonesian name of this species refer to the fact that its flowers open around four o'clock in the afternoon. These fragrant trumpet shaped flowers close again the next morning. Actually the flowers open as reaction on a drop of the temperature and not because of the time of the day. In my garden the flowers rarely open before 5 o'clock.

The origin of the Four O'Clock Plant lies in tropical America, some sources say Peru.

The plant usually does not grow much taller than half a meter. Its leaves are oval (heart shaped?) and shiny. The purple and white flowered variety are probably most common. Next to these there are varieties with red, pink, orange and yellow flowers.

The Four O'Clock Plant grows best in full sun or partial shade. The plant produces seeds that are oval black with a wrinkled surface when ripe. Propagation is from seeds. In my garden I have a purple flowering variety of this species growing in a sunny spot. Regularly new plants appear from dropped seeds. The plants do not invade the shady parts of the garden. 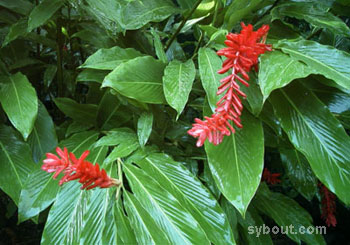 Alpinia is a member of the ginger family. This species grows in clusters of long stems with long leaves that can become up to 2 meters high. It has long lasting bright red flowers (actually bracts with small white flowers inside) of about 20 - 40 cm long.

Propagation is by means of dividing the roots, clusters or by planting the young plants that are developed at the base of old flowers.

The plants in my garden initially grew very well, but have lately suffered a during the dry season. I grow them in combination with Heliconia that seem to be much stronger and win the competition. 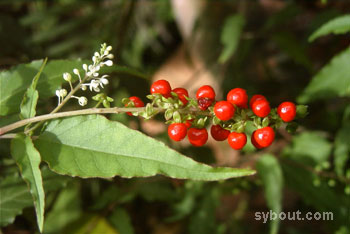 Pigeonberry is a small perennial shrub with a height of around 1 meter. The plants are herbaceous with sometimes a wooden base. The leaves are ovate to lanceolate with a length of about 10 cm.

The species produces attractive small round bright red berries with four green petals at the base. The flowers are very small and white or pink coloured. Flowers and berries are often present at the same time.

Its origin is said to be the West Indies. The species is now common as well in the in Hawaii and southern area of USA.

Propagation is by cuttings or seeds.
After bringing a potted plant home, soon seedlings showed up all over the garden, especially in shady places. All the plants have pure white flowers.