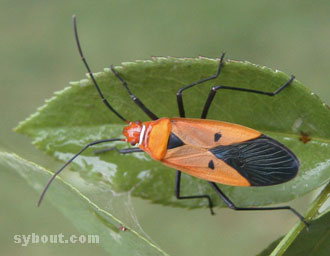 As I know little about insects I had some problems finding the name of this bug. To make it have a name I have called it Nemo Bug for years. Now, after searching the internet, I guess it is a Red Cotton Bug (Dysdercus cingulatus). Whatever its name, I like the surprising pattern and color combination on its chest. So far it only once visited my garden. The photo was made while it was resting on a rose shrub. The Red Cotton Bug feeds on a variety of plants, not just cotton. Probably this animal could not find anything interesting in my garden, as it left soon and never returned. 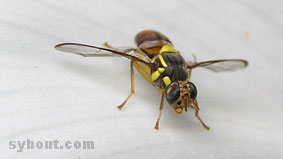 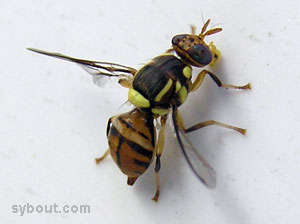 I classified this as a fruit fly (Bactrocera papayae). Please correct me if I am wrong. It is certainly not a very regular guest of the garden. May be I should be happy for that as it might go for the fruits of our mango tree.

The Papaya Fruit Fly can do much damage to a wide rage of fruits and fleshy vegetables including mango, banana, papaya, guava and tomato. Control is easiest done by fruit bagging, destruction of fallen and overripe fruits, and the early harvest of mature green fruits. The first photo is one of the few insect pictures where I am satisfied enough about the quality. The second photo is the same animal seen from a different angle, but a bit out of focus. There is still much to learn about photography...

I have been told that this is a "predatory fly". So, does this mean that it is a "good guy" who might help to control the fruit flies shown above? I can not find its name. Who can help me? Like the fruit fly above it is a rare guest of my garden. 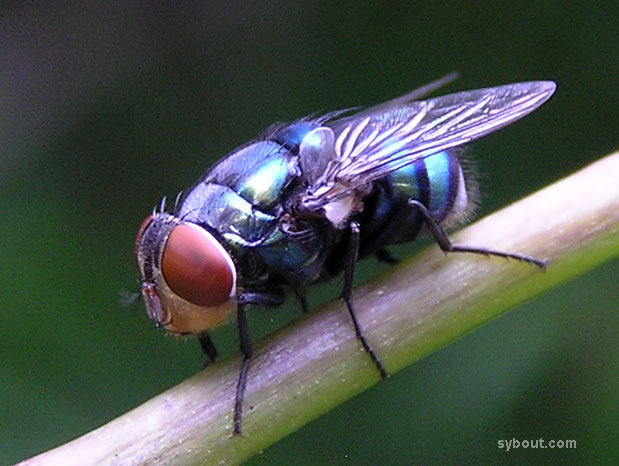 After a searching in different sources, I realised that this certainly is not the only fly species with red eyes. The world of flies only has a amazing variety. Who can help me in the right direction?
Is this a Lucilia spec.?

The caterpillar above probably is the best insect picture I have made so far. Though the animal was only a few centimeters long, the photo shows much detail. This was a reason for me to look for more information on the body parts of caterpillars.
In the picture the caterpillars head is on the left. It has a brown-yellowish color. The tiny black spots in it are eyes. The black patch on the back is one of the falls eyes, that probable have the function of impressing enemies. Somewhere at the head should be the mouth parts, but I cannot discover any.
Like all insects the caterpillar has six legs attached to the thorax. Three legs are visible just right of the head. The other leg-like body parts attached to the abdomen are prolegs or falls legs. These prolegs have no segments or joints, but have a circle or band of tiny hooks to grip for support.
The abdomen exists of ten segments, of which number 9 and 10 are fused. The oval holes at the side of the abdomen segments are called spiracles and are used for breathing.
I have no idea what function the little antennae at the end of the caterpillar have.

A few days after I made the picture above I found the pupa of the caterpillar in a plant nearby its former place. It was attached with its tail and a silky girdle to a leave stalk.

P.S.: For a long time I did not know the proper name of this caterpillar. By coinsidence l found the name of this species when I was looking for a butterfly visiting my garden at this page with pictures of the butterfly. There seem to be some subspecies, so I am still curious. This species is said to be common in South East Asia. 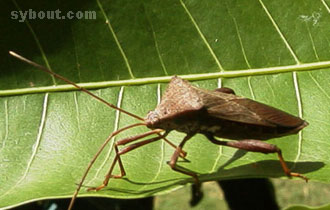 What is the name of these bugs? Please help.
I often find them on the young leaves of the mango tree. It seems they suck sap, after which the leaves wither. 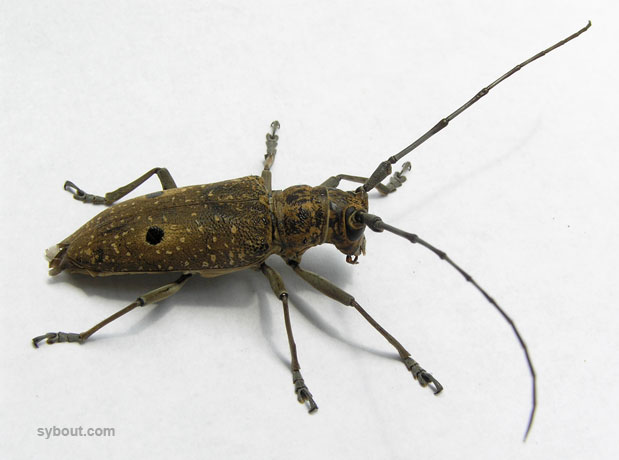 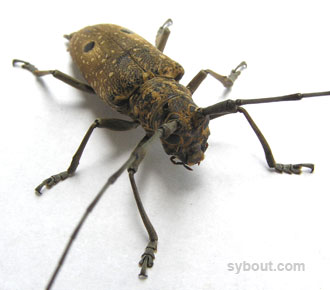 One evening I found the beetle in the pictures above next to the outdoor lamp. Because of the lack of light I could not make a photo showing enough details. The next day I could just in time safe the animal from the claws of our cat who was playing with it in the lawn. After making some shots in a place with enough light I released it in the mango tree where it blended in perfectly with the bark.

The beetle measures about 3 cm. It has striking long antenna of about 4 cm length. Next to that the two false eyes on the back are characteristic.
So far I did not find out what this animal consumes. It was basically inactive.
I am certainly not a entomologist and haven't seen much close ups of insects yet. That's why it always is a surprise when I blow up macro shots of these creatures and look at the details like legs, mouth parts, antenna and eyes. Do I see well that the eyes of this beetle are positioned around the bases of the antenna? Strange... . 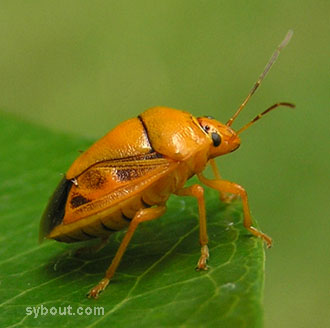 While working in the garden I found a little orange bug sitting on my arm. As it did not try to fly away,  there was enough time to put it on a leave and photograph it. It is the first time that I see this animal. After it finally was bored to pose in front of the camera it went for a flight. I have looked around to find out where it was hiding and on which plants it lives, but nothing to discover. 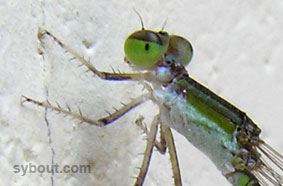 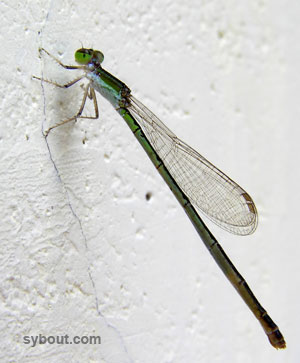 Damselflies rarely visit my garden, but I was ably to make a picture when one was friendly enough to pose for a while on a white painted wall.

The Common Bluetail is native from Africa, through the Middle East, Southern and Eastern Asia up to Papua New Guinea. 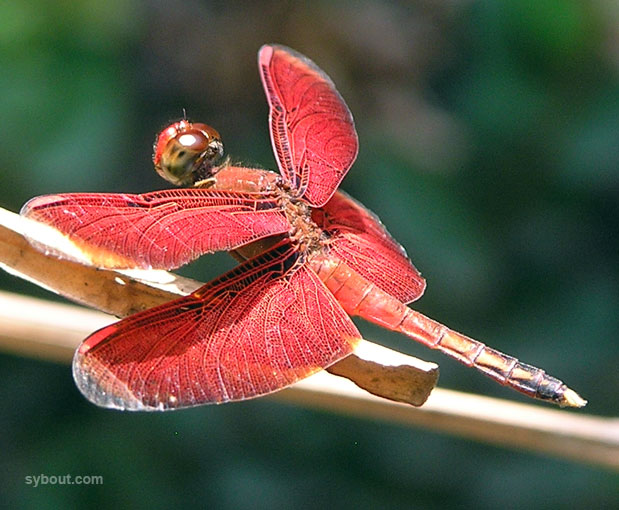 When I tried to identify the dragonfly in the photo above, I learned that there are several red-brown colored species that are common in Indonesia. They look very much the same, but have slightly different wing tips. Based on that I think it is: Neurothemis manadensis

There are times that several dragonflies visit my garden for weeks. The bigger part of the year I cannot find any though. I guess there is a "dragon fly season", but I don't know yet during which months this is. The Oriental Migratory Locust is common in a big part of South East Asia. Normally it lives solitary, but in certain conditions in can develop into swarms damaging crops.

Sometimes I find a plant invested with young locusts. Normally these disappear before they can finish the plant. I guess they are eaten by predators.

Above and below two different species of paper wasps. The picture above shows the insects on their comb with larvae inside. Again I would be pleased if somebody can tell me the scientific names of these species.

The wasps construct the combs of paper-like material made by chewing and mixing plant and wood fibers with their saliva.